CZ LOKO has another order from the Balkans. The smallest EffiShunters are going to Serbia

The Serbian national carrier Srbija voz that provides passenger transport in the country is planning to add two EffiShunter 300 locomotives to their vehicle fleet. This was decided in an international tender won by the Czech manufacturer CZ LOKO. Similar to Czech Railways that currently own 12 of these locomotives, the Serbian company is going to employ them in the stations and depots for shunting carriages and for train arrangement. Based on the contract, the locomotives are scheduled for delivery in the first quarter of 2021.

“We are constantly seeking new market opportunities. There are two kinds of those - development of new locomotives and territorial expansion. This means not only opening a new market but also strengthening your position therein. That's mainly what we are trying to achieve in the Balkans,” says Ľubomír Dlábik, the business team manager.

Two EffiShunters 300 are already leaving for Serbia in March. These are the ones that were ordered by the state railway management authority Infrastruktura železnice Srbije last year. They were selected in an international tender, too. The operator is going to employ them in towing of lighter work trains used in railway maintenance. Both contracts include the installation of the Indusi national security system.

“It was this positive reference that greatly helped us win the public tender,” Dlábik added.

CZ LOKO developed EffiShunter 300 as the smallest representative of their product portfolio. It is a two-axle locomotive driven by a CAT C13 combustion engine with a power of 328 kW with an electric AC/DC power transfer and the top speed of 60 km/h.

The locomotive is also owned by Czech companies ČEPRO and VÚŽ and Polish Metro Warszawskie where it has passed the testing period and now it is waiting for the final approval for regular operation in technological service between the maintenance halls in the Kabaty station. 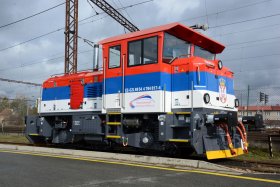