CZ LOKO has produced the jubilee 1,111th vehicle. The locomotive will be used by the ČEPRO company, in the warehouse terminal in Loukov

The Czech locomotive manufacturer CZ LOKO reached another historical milestone when the 1111th railway vehicle produced left the gates of its production plants. That vehicle being the EffiShunter 600 locomotive for the ČEPRO company. The ceremonial handover and launch took place in Loukov in the Kroměříž region where the major Czech fuel distributor has one of its warehouses with a fully automated tanker terminal. It is this area that the locomotive will serve. This is the third machine that the company has purchased from CZ LOKO. In previous cases, they were EffiShunters of the 300 and 600 series.

According to Jan Duspěva, CEO of ČEPRO, the importance of rail transport for servicing company warehouses is growing. “We handle hundreds of percent more wagons, especially during the shutdowns of domestic refineries. Thanks to this, we will be able to maintain the stability of the Czech fuel market,” he said. He also added that there is great satisfaction with the operation of vehicles from the traditional Czech manufacturer on company siding tracks.

“Technically and operationally, they are first-class vehicles. Thanks to them, our operating costs have been significantly reduced,” confirmed František Todt, Chief Operating Officer and member of the Board of Directors of ČEPRO, during the takeover of the jubilee locomotive. ČEPRO is an important player in the oil product market. Its distribution network includes 17 fuel depots connected to three refineries, over 1,200 km of pipelines and also 205 EuroOil filling stations.

“If someone told me twenty years ago that we would make a locomotive with the serial number 1111, I would not have believed it. During that time, however, we have come a long way. Today we manufacture locomotives on the basis of our own know-how, here in the Czech Republic. I am proud of all our employees who participate in the production. They are a guarantee of further development of the company,” said Josef Bárta, Chairman of the Board of Directors of CZ LOKO.

From the original repair shop of locomotives of regional importance, which literally struggled for survival in the mid-1990s, today’s CZ LOKO became the European number two in the production of new diesel shunting locomotives. The company has its own development, construction, production and comprehensive service. More than 60 percent of the production of locomotives meeting the highest European TSI standards is exported to 19 countries on two continents 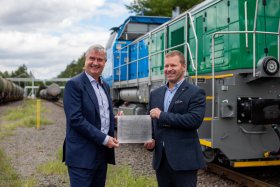 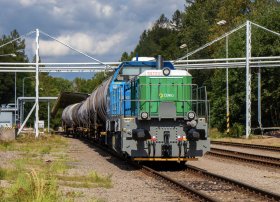