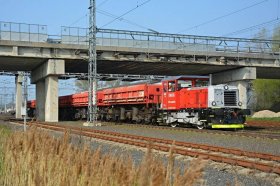 National carrier Czech Railways (ČD) rejuvenates and increases the efficiency of its fleet of shunting locomotives, which provide shunting of passenger sets and units in passenger stations. Old, unreliable locomotives with much higher consumption and maintenance costs will be replaced by modern diesel-electric shunting locomotives produced by CZ LOKO. The locomotives or, more precisely, their diesel engines naturally meet the strict environmental limits of the European Union and are classified as STAGE IIIB.

“Modern shunting locomotives are not only environmentally friendly and produce much less dust and greenhouse gas emissions, but also more cost-efficient in operation. They are lighter, consume less fuel and have longer operational maintenance intervals, which ensures more cost-efficient servicing of stations with parked train sets than in the case of the older locomotives they are replacing,” says Miroslav Kupec, Member of the ČD Board, responsible for technology, service and property.

“We are very pleased with the success in the public competition organized by the national carrier. This success confirms that the development of this locomotive, designed primarily for shunting service, was meaningful and filled a hole in the market. In its performance category, it is the absolute top in Europe,” says Josef Gulyás, Managing Director and Vice Chairman of the Board of CZ LOKO.

The new locomotives, also known under the trade name EffiShunter 300 (Class 794), replace more than twenty-year-old ČD Class 714 locomotives produced in the mid-1990s by modernizing even older locomotives from the 1970s. Czech Railways will deploy them for shunting service in large passenger railway junctions with frequent shunting of long-distance and regional trains. They are heading to Bohumín, Olomouc, Hradec Králové, Plzeň, Brno and the Prague railway junction.

It is a two-axle (Bo) diesel-electric locomotive with a maximum speed of 60 km/h and a 328kW CAT C13 engine. The weight of the locomotive is 36 tons, which, in combination with diesel-electric AC/DC power transfer, optimally utilizes adhesion and the locomotive thus reaches a maximum tractive effort of 124 kN. The vehicles are also equipped with a digital control system, online diagnostics, multi-control operation system and, last but not least, wheel slip protection.

CZ LOKO introduced its smallest locomotive at its world première at the prestigious InnoTrans Berlin trade fair three years ago as a product of Czech research and development, where it attracted attention with its concept and solution. “Within trial operation, Class EffiShunter 300 was approved for operation in the Czech Republic and Slovakia. Approval in other countries, not just in Europe, will happen in near future,” added Josef Gulyás.

A contract for the delivery of 12 Class 794 locomotives was signed in June and the deliveries are planned to be completed by February 2019.