The Hungarian freight carrier CER Cargo Holding, member of the L.A.C. group, has expanded its rolling stock with the first of two ordered EffiShunter 1000M locomotives. The handover ceremony took place on 28 June at the CZ LOKO plant in Jihlava with the participation of the highest representatives of both companies. The second locomotive will be put into operation in September this year.

“Providing a reliable and well-functioning independent traction on the Hungarian and Slovak markets is of strategic importance for us. Due to the specifics of the local market and the railway network, independent traction gives us a clear competitive advantage. That is why the CER group is expanding its diesel fleet with reliable CZ LOKO locomotives,” said László Horváth, Chairman of the Board of CER Cargo Holding, during the handover ceremony.

“Our locomotives have a huge potential in Hungary. After all, this is the fourth type of locomotive that we have delivered to CER Cargo Holding over the last three years,” added Josef Gulyás, General Director of CZ LOKO. The carrier currently operates EffiLiner 1600, EffiLiner 3000 and EffiShunter 1600 locomotives.

Through its subsidiary CER Slovakia, CER Cargo Holding plans to use the first locomotive, 742.761, in Slovakia and the Czech Republic. The second locomotive, 742.762, will be operated primarily by CER Hungary. Due to the expansion of business activities, it is planned to be deployed also in Hungary and Croatia. Therefore, the locomotives are equipped with the INDUSI and MIREL safety systems as standard. If necessary, they can also be fitted with ETCS.

EffiShunter 1000-M (Class 742.71x) is a complex upgrade of old ČKD Class 742 locomotives, in which CZ LOKO used its experience from the production of other types from its portfolio. In terms of design, it is simply EffiShunter 1000 built on the platform of the original Class 742 locomotives. The changes include, for example, hoods with a turret cab or a CAT 3508 C diesel engine with an output of 1000 kW. CZ LOKO is currently fully producing a 50-unit series for ČD Cargo. 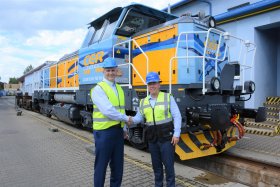